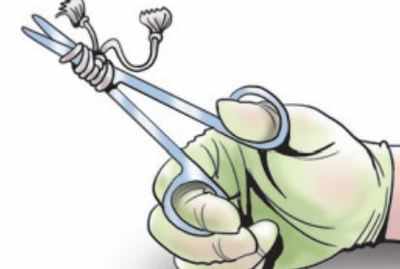 68
SHARES
1.7k
VIEWS
Share on FacebookShare on TwitterShare on Whatsapp

“I took the girl to the Clinic, she went into the room of the doctor and asked me to stay out, as she wanted to discuss something personal with the doctor”

Treatment of an ‘unmarried’ girl at a Jammu based private clinic has been shrouded in mystery after allegations of unlawful activities under Medical Termination of Pregnancy (MTP) Act has been reported. However, the health department has apparently condoned the issue, which was evident from their reluctance to call an inquiry into the matter.

According to the sources, the 24-year-old girl got treatment at a local Jammu based private clinic-Ankur Maitrika, but it has not been ascertained what kind of ailment the girl was suffering from.

“A young girl was brought to the clinic by a hostel warden of one of the private educational institutions of Jammu. She was panicked and was immediately shifted to the room, where she was given treatment,” said sources, alleging that the facial expressions and body language of the doctors and staff vindicated that something ‘illegal’ has been done, as they were clearing up things in haste.

If sources are to be believed, the hospital asked for Rs 25000 to carry the treatment, but after some negotiations, it was settled on 20, 000.

Meanwhile, eye witnesses expressed apprehensions that there is every possibility it could be an apparent case of ‘abortion’, because everything was done in a discreet manner.

“There was an aura of suspicion. The girl was discharged on the same day, which is possible only when the patient is not critical or has been aborted through Dilation and Curettage procedure,” asserted eye witnesses.

To confirm the veracity of the received information, The Typewriter contacted the concerned doctor, Dr. Renu Wakhloo, who happens to be the owner of the clinic and a renowned Anaesthesiologist at Government Medical College and Hospital Jammu. She, however, denied the reports of any such case, the hospital has received.

“There is nothing like this. We have received no such case and if you feel that anything of such sort has been done, you can contact the family of the girl,” said Dr Renu, adding “There should be an indication for the abortion, we cannot do abortion only because patient is saying so.”

When contacted Dr Ajay Wakhloo, the owner of the Ankur Health Clinic, he outrightly denied the allegations and said “We do not deal with such cases.”

Pertinently, in conversation with both the owners of the clinic, this reporter did not divulge any detail of the girl, despite it, the family of the above said girl telephonically approached The Typewriter, claiming that why the ‘lady doctor’ is being questioned with regard to their daughter.

Meanwhile, to vindicate the allegations of ‘wrong doing’, warden of the hostel of one of the premier educational institutions in Jammu also appeared on the scene and questioned The Typewriter.

“You have made calls to a doctor (apparently talking about Ankur clinic). She was asking me whether I have told anything to anybody,” said warden, adding “I took the girl to the clinic, she went into the room of the doctor and asked me to stay out, as she wanted to discuss something personal with the doctor.”

She said that the doctor told her that the girl had injuries and requires treatment. “Nothing more than that was told to me,” claimed the warden, wishing not to be named, adding “When doctor told me to talk to you, claiming that some reporter from this number is threatening her, I asked her what I am supposed to tell the reporter, when I was not told anything.”

She however asserted that the doctor knows what she has done and now spilling the beans. “I am surprised that the doctor asked me whom I have told about the incident,” she said and added that they were demanding Rs 25000 from her, but she has no idea about how much money they finally charged from the girl.

Warden also stated that there is no record of the treatment. “I told them to kindly provide me report as I have to show it to the concerned authorities, but they did not provide me anything,” claimed the warden, adding that the hospital management told her that the reports shall be provided to the family of the girl, despite the fact that she brought her to the clinic and it was her responsibility.

When questioned why family and warden were made to speak to The Typewriter, despite the fact that no name was taken during the previous conversation, Dr. Renu Wakhloo dodged the query and claimed that the patient was brought to her in a critical situation and it was a moral responsibility to provide treatment.

“I have a written consent of the warden to carry the treatment of the patient. I told them that the girl should be shifted to the GMC&H, but she said they would prefer a private clinic,” said Dr. Renu, adding that the girl needed only ‘stitches’ due to excessive bleeding.

When a senior Gynecologist was consulted to understand the different dimensions of the case, as multiple narratives were spilling out, the Gynecologist, wishing anonymity stated that although, the management of the private hospital is denying the allegations, which is natural, but the facts indicate that something wrong has been done and the doctors are trying to ‘cover it up.

She said, “The hospital management should have also clarified that why they did charge hefty amount of Rs 20000 for mere stitching.”

Ironically, Director (DHS) Dr. Renu Sharma initially listened to the facts, but later on ignored the repeated calls of The Typewriter, showing their reluctance to intervene into the matter.

However, when Advisor of the Lieutenant Governor- RR Bhatnagar was contacted, he immediately sought details of the matter.