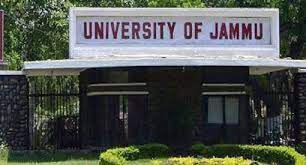 27
SHARES
687
VIEWS
Share on FacebookShare on TwitterShare on Whatsapp

“Once being patronized by the administration, Prof Pankaj Srivastava had been pressuring Jammu University administration for illegally favoring one of the JUTA office bearers, who happens to be from of English department”

According to the sources privy to the development, JUTA president Prof Pankaj Srivastava allegedly instigated other members of the association to stage a protest against the outgoing Vice Chancellor, after he did not comply by his demand of adjusting one of the close associates of the JUTA presidents.

“Prof Pankaj Srivastava wanted the outgoing Vice Chancellor to accommodate one of the JUTA members, who happens to be close to the president, but when Vice Chancellor refused to entertain their illegal demands, JUTA provoked other members to stage protest against the University administration as well as Vice Chancellor,” sources said and added that although JUTA president claimed to have protest in support of their demands, which were otherwise not in the agenda since long time.

Eyewitnesses told The Typewriter that Prof Srivastava despite provocation by the JUTA president, a thin attendance of protesters was recorded, as only couple of teachers showed up for the protest, which ended as soon as it started.

“Once being patronized by the administration, Prof Pankaj Srivastava had been pressuring Jammu University administration for illegally favoring one of the JUTA office bearers, who happens to be from of English department,” said sources, adding that besides this, Prof Srivastava also wanted to hush up the matter of much published microscope and scientific equipment purchases scam.

Sources alleged that Prof Srivastava has a known record of blackmailing administration and fellow colleagues in order to get his nefarious design fulfilled. “One of the JUTA members holding a senior position in Computer Science Department has been exposing the misdeeds of Prof Srivastava in various forums,” said sources, adding that the group of teachers who are at the receiving end of his blackmailing and corrupt practices shall be bringing the myopic policies of JUTA president to the notice of new Vice Chancellor in the form of a signed document.

Sources further said that Prof Srivastava went out of the way and canvassed for a senior professor of the University presently on the deputation to Gujarat for being appointed as Vice Chancellor, Jammu University.

If sources are to be believed, Prof Srivastava was also allegedly involved into an illegal hiring of the  manpower on outsourcing basis, without following the laid down norms.

“There is a deep rooted nexus between JU administration and the ABN agency Gandhi Nagar Jammu to engage the manpower for various types of services required in the main and offsite campuses,” said sources, adding that all this was happening under the direct control of Prof Srivastava.

Meanwhile, talking to The Typewriter, JUTA president- Prof Pankaj Srivastava said that they staged protests against the present Vice-Chancellor and his administration for alleged continuous betrayal on the promises made to teachers and other employees of the university from time to time.

“Most of issues presently faced by the employees and teachers were created during the tenure of Prof Manoj K Dhar, Vice-Chancellor of Jammu University,” Prof Srivastava said and added that they have observed a continual betrayal on the part of Vice-Chancellor and his administration on the issues related to the welfare of teaching fraternity.